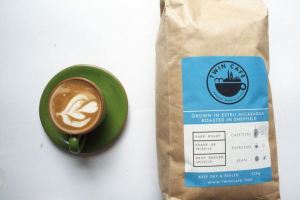 Twin Cafe was started in 2014 by Sam, Tom and Sarah. They began to import green coffee from a small farmer’s co-operative in Miraflor, a nature reserve north of Estelí in Nicaragua. They paid the farmers a premium for the coffee. The coffee was then roasted and packaged in Sheffield at a local roasters. At the time they were all students at the University of Sheffield and were motivated by the idea of creating a coffee company that benefited the communities where the coffee is grown and and also where it’s sold. Their idea was to pay farmers the best possible price and to give the profits to social projects working with young people in both Sheffield and Estelí. They knew next to nothing about starting a business but were ready to give it a shot!

Four years later, they’ve sold over 12,000 bags of delicious coffee, given over £2,000 to local charities and bought over 4 tonnes of green coffee from farmer’s at a premium price.

Thankfully, after some changes in the original team and life getting in the way as it has a tendency to do, a serendipitous meeting with Twin Cafe’s coffee roasters led to a local couple, Anne and Jeff, hearing about the project and wanting to get involved.  Anne and Jeff are getting Twin Cafe going again.

Almost everyone who’s been involved with this project has been motivated by the idea of finding a fairer way to do business; one that’s rooted in local communities and treats everyone, from customers to producers, equally. We are huge fans of Twin Cafe and hope that you, like us, will carry on supporting them.

If you’d like to get your hands on some of their delicious coffee just head over to Twin Cafe’s online shop which is back up and running again!

You can also check out their blog with stories from the growers, Anne and Jeff and the development of Twin Cafe from its earliest incarnation here.

In May 2016 we were approached by Sarah Grearson, a student at Sheffield University languages department to see if we would like to collaborate with her on her Masters dissertation in translation.  Sarah’s proposal was to write a blog focused on two projects we currently support, whose co-ordinators have also visited Sheffield.  She interviewed both about their experiences as community activists in Estelí via Skype and wrote a blog about their lives to share with people in both cities in Spanish and in English.  We were really pleased with her work, to read it for yourself follow this link: